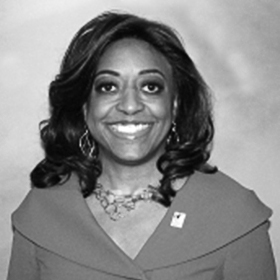 Dr. Angie Taylor has a long history of excellent leadership, people development and community service. She is the President and Chief Executive Officer for Guardian Quest, Inc., an organization specializing in providing training, organizational development and leadership solutions for corporate, government, educational and military clients across North America. In addition to her work speaking, training and coaching, she continues to serve her community. In December of 2014, she was appointed to the Washoe County School District Board of Trustees, becoming the first African American to serve in that capacity. In January of 2016, she was selected Board President by her Board colleagues and most recently, she was elected by the citizens in District E to serve a full four-year term, beginning in January 2017.

Regardless of her role, she is committed to adding value and making a difference. She is passionate about a few things, and has intentionally positioned herself to work within those areas. Education, leadership, personal development and faith are the areas that she loves and those that have driven her success.

Dr. Angie has an earned doctorate in Educational Leadership (PhD), holds a Master’s degree in Public Administration and Policy (MPA) and a Bachelor’s degree in Business Administration (BS), all from the University of Nevada, Reno. Her background is in higher education where she completed a storied 20-year career at the University of Nevada. While at Nevada, she served in several senior level leadership positions including Senior Associate Director of Athletics, Assistant Vice President for Development and Alumni Relations, and Associate Vice President for Student Success Services.

Dr. Taylor has served on numerous committees, task forces and boards for the University, the local community and nationally. Most recently she has served as either a board or advisory board member for the Nevada Women’s Fund, United Way, Access to Healthcare Network of Nevada, Education Alliance of Washoe County, Northern Nevada Black Cultural Awareness Society, Junior League of Reno, and Nevada System of Higher Education.

Angie is a passionate, energetic presenter and has dedicated her life to making people and organizations better. She has recently penned her first book: “Leadership Matters: Lessons that Shaped My Leadership” which is highly sought after wherever she speaks. She has received many awards and recognitions for her leadership and community service including membership in three halls of fame and inclusion on two “people to watch” lists. Dr. Taylor is also an ordained minister and serves as the administrative assistant pastor at Greater Light Christian Center in Reno, Nevada.