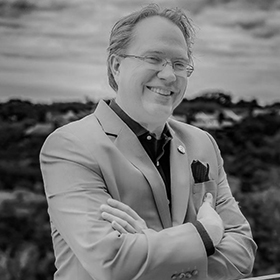 Aaron began his real estate career in 1995 after graduating from Texas A&M University. In 2000, he founded one of the first “openly” discount real estate brokerages in Austin and Texas. In late 2002, he sued the state licensing body, The Texas Real Estate Commission, over anti-competitive rules it recently passed. He immediately won an injunction to the suit and started a 4 year public saga which culminated in being asked to provide expert testimony before a US House of Representative Committee on “Changing Real Estate Market.”

He was named honorable mention in Inman’s Most Influential Broker list in 2005 and has been a panelist at Inman Connect as well a Department of Justice workshop on Competition Policy and the Real Estate Industry. He has been featured in news oulets such as the Wall Street Journal, Dallas Morning News, Austin American Statesman, San Antonio Express-News, USA Today, CSPAN and NPR radio.

Aaron has a 10 year-old daughter and 9 year-old son and volunteers his time to many things. His favorite is being Head Coach of the “Not the Longhorns”, a 3rd and 4th grade boys flag football team in SW Austin.